LOST IN THE SHADOWS Update!

It's been a pretty full on and epic week for THE LOST BOYS 30th anniversary book project - LOST IN THE SHADOWS. Things kicked off in a rather 'excellent' way, with a 50min interview with Alex Winter, who of course played the vampire 'Marko' in the film. Shortly after that phone call, I received word that the director of THE LOST BOYS, the brilliant JOEL SCHUMACHER, will be joining us to talk about his time directing the movie. Now if THAT wasn't enough - and this one kills me
445 views0 comments
Paul

Last night, just under 300 people crammed into the Prince Charles Cinema to celebrate the 35th anniversary of the John Landis classic 'AN AMERICAN WEREWOLF IN LONDON'. The moon was full, the atmosphere was electric as I introduced the brand new 2016 restoration to the sold out crowd, on the very day that it opened in London back in 1981. Prior to the film, I was introduced to the stage by FrightFest's Paul McEvoy and rather than drone on about the BEWARE THE MOON (the origina
22 views0 comments
Paul

It's been a busy, busy week on LOST IN THE SHADOWS, my upcoming book on the making-of the 1987 fan favourite, THE LOST BOYS. Things kicked off last Monday with a 40 minute phone conversation with the legendary Richard Donner. I then had the pleasure of talking to Joe Ferrara, who is the owner of Atlantis Fantasyworld - the comic book store in Santa Cruz that was used in the movie. Then on Thursday I had the pleasure of talking with the sexy sax man himself, Mr. Tim Cappello!
274 views0 comments
Paul

This Saturday night on November 12th, The Prince Charles Cinema plays host to a 35th anniversary screening of AN AMERICAN WEREWOLF IN LONDON - 35-years to the day that it opened in Leicester Square in 1981. ​ The screening will be the first UK presentation of the brand new 2016 4k restoration, that was recently supervised and approved by director John Landis. The brand new DCP had its world premier in September at the Venice Film Festival and was recently released on Blu-Ray
30 views0 comments
Paul

My new book, LOST IN THE SHADOWS - The Story of THE LOST BOYS is now well under way. As of right now we have confirmed well over a dozen brand new interviews with cast and crew. The project, however, just got a huge boost, as I just got off the phone with the legendary Richard Donner! ​ Donner served as the Executive Producer on THE LOST BOYS, as well as serving as director on many classics such as THE OMEN, SUPERMAN, THE GOONIES, the LETHAL WEAPON series, SCROOGED... I could
15 views0 comments 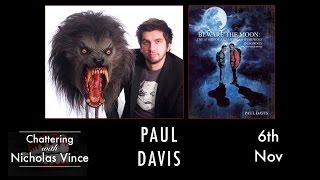 On Sunday night I had the great fun and privilege to go on the wonderful online chat show - 'Chattering with Nicholas Vince' - hosted by the brilliant Cenobite himself. Nick and I had great fun talking about everything from the BEWARE THE MOON book and the upcoming follow up on the making-of THE LOST BOYS.
15 views0 comments

ALL BOOKS ARE SOLD OUT!

ALL BOOKS ARE SOLD OUT!